Are We on the Verge of a Housing Market Correction?

After two years of unprecedented growth in the housing market, we are beginning to see signs of cooling. Is this the beginning of a sharp correction? Recession talks are everywhere. The lost wealth effect from market turmoil, rising rates, inflation, and negative consumer sentiment are all bad signs, right?

While it’s certainly possible, there is a lot of data that suggests otherwise.

This is through June 2022. It’s still way below 2017 levels and doesn’t appear to be reversing.

Price reductions are increasing, but not spiking

According to Chief Economist Danielle Hale at Realtor.com in a recent MarketWatch article, 1 in every 7 homes on the market last month had a price cut versus 1 in every 13 in June 2021. However, this rate is still below the 1 in every 4-5 listings from 2017 to 2019.

In addition, not all housing markets are impacted equally. As one might expect, location matters. According to Bloomberg, the number of price cuts has increased the most in the market’s hottest areas. And according to that list, all the top cities sound like vacation destinations. In other words, my hometown, West Chicago, Illinois, is not on this list.

The pandemic, and the remote work trend that followed, caused many to leave big cities and gravitate to areas further afield and often less expensive. Will this revert as people start to return to the office? Time will tell, but certain areas will likely be impacted more than others.

Despite the recent increase, rates relative to history are not that high. The average 30-year mortgage rate is still below the 40-year average. 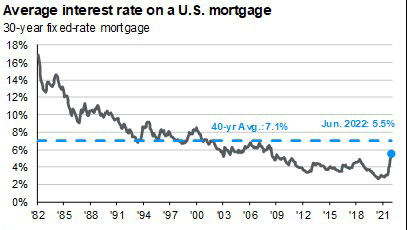 If you think rates are high now, talk to anyone that had a mortgage in the 70s and 80s. “You don’t know history,” they’ll say.

This is an ad from June 1984. Rates touched 15% at the time – 15%! And that was an improvement over the previous few years. Notice the grim sub-header that economists see things getting worse at the time:

That didn’t happen, however. As you can see below, rates began a downward trend shortly thereafter that didn’t end until very recently.

It goes to show even the best economists can’t predict the future.

Inventory is increasing, which is good news for buyers. This should help balance the market, but it’s still below the 40-year average and nowhere near the levels experienced in 2008: 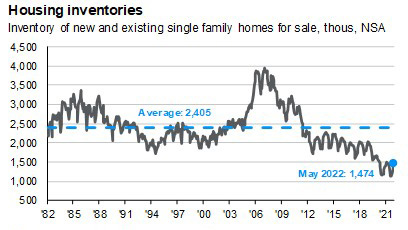 Borrowers are higher quality than in 2008

Credit quality in mortgage originations is much higher than in 2008, as the green bars illustrate below. This makes the chance of widespread defaults less likely: 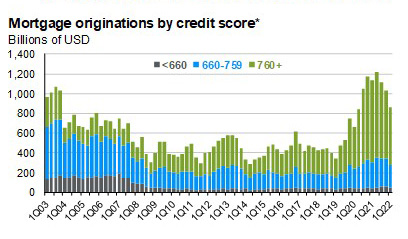 Unlike 2008, homeowners have a much larger cushion to fall on should prices fall. According to FRED (Federal Reserve Economic Data), homeowner’s equity as a percentage of real estate owned is the highest in 40 years.

The odds of a 2008 repeat with underwater borrowers (where the mortgage balance exceeds the home’s value), which forced selling and foreclosures are unlikely.

It’s always possible, but the probability seems low. The Fed funds and mortgage rates don’t correlate exactly, but they do tend to go in the same direction. The market is currently pricing in a Fed Funds rate of about 3.5% by year-end. When rates were at 15%, the Fed Funds was 11.3% (source: Macrotrends.net). We expect to see substantial continued rate hikes well beyond the 3.5% target if that were to happen, and we are still a long way from that. 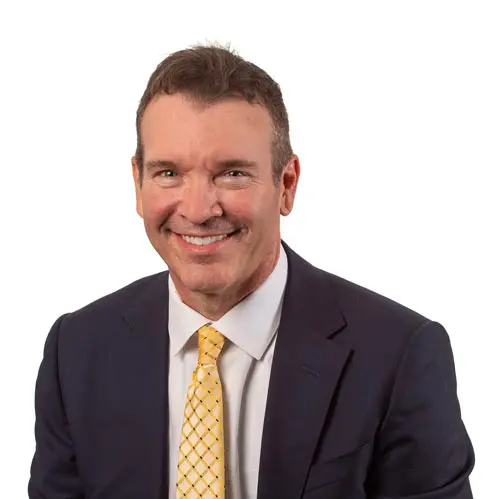 Gary is a Wealth Manager at BDF and member of the Firm’s Investment Committee. He specializes in executive and stock-based compensation plans, including stock options, restricted stock and deferred compensation. He combines his tax knowledge, executive compensation experience and capital markets expertise to help clients reduce their tax burdens and achieve each of their unique goals.